iOS14, Apple's mobile operating system allowing users to opt-out of data sharing in their apps, meant a lot of change for advertisers on what and how they will be able to track conversions moving forward. In other words, advertisers experienced the following:

In our original article, Advertising in a Post iOS14 World, we proactively brainstormed workarounds to reduce the impact of iOS14 for our clients, but once 2021 hit, it was time to put our ideas to the test.

With these two things in mind, we set out in 2022 to incorporate these workarounds for the benefit of our campaigns and our clients. Read below for an example.

Getting Creative with Analytics: Workarounds for iOS14’s Impact

With attribution windows cut dramatically as an outcome of IOS14, we knew that conversions requiring a larger commitment, such as a purchase or application submission, would be impacted the most given the extended time that it takes to take said action after clicking or seeing an ad.

Because of this, we implemented two workarounds depending on what made the most sense for each client’s campaign goals. 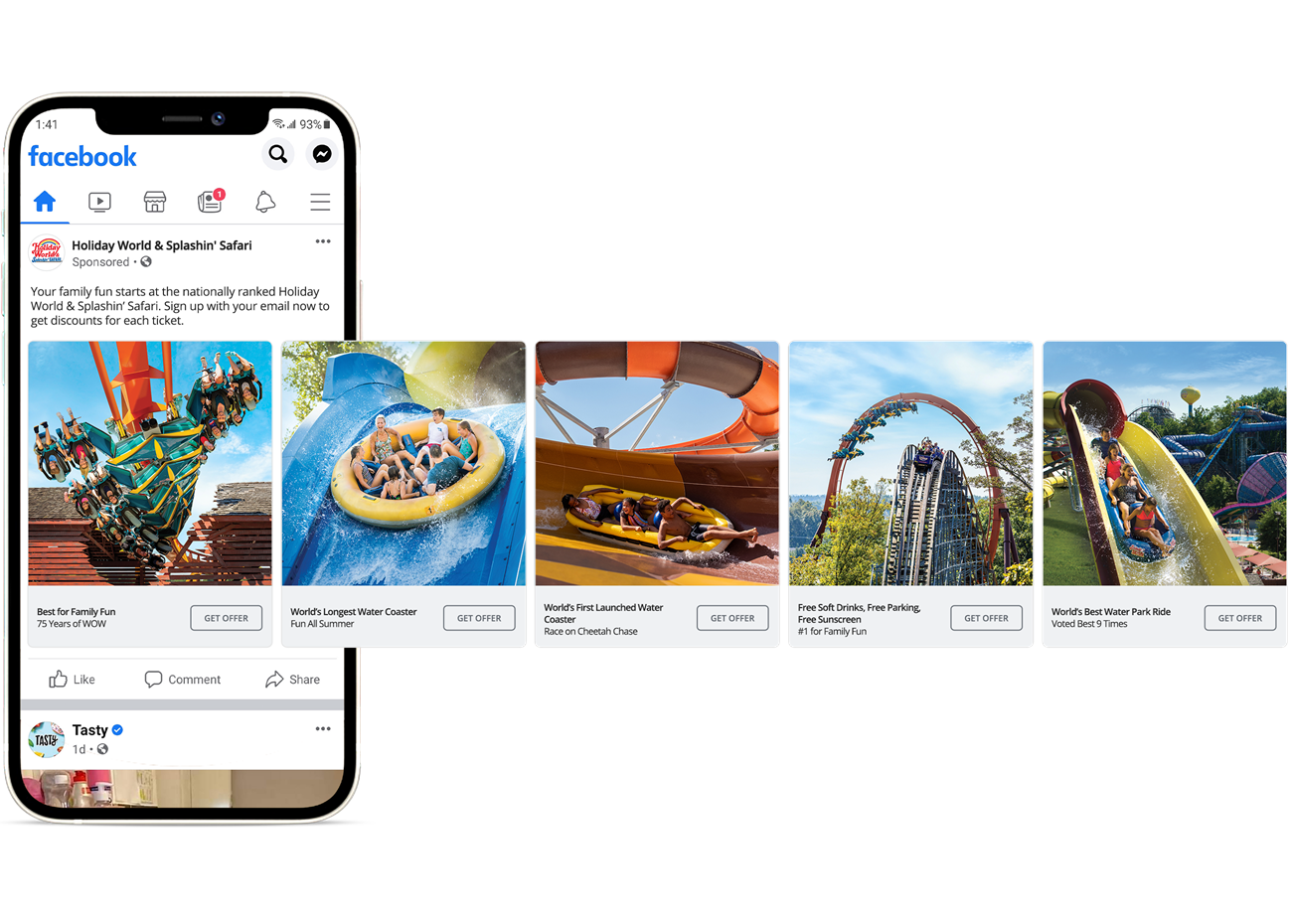 How Did It Work? A Mini Holiday World Case Study

In our partnership with Holiday World & Splashin’ Safari, we implemented both workarounds in our 2021 campaigns.

In the park’s first-of-its-kind digital advertising strategy, we diverted advertising funds from our traditional Buy Tickets Campaign to launch a massive Lead Generation Campaign. Targeting for each campaign was split based on awareness level. The Buy Tickets Campaign included ad placements with targeting for high awareness groups (past purchasers, social media followers, etc.), while the Lead Generation Campaign reached low awareness groups (geographically distant markets, general family fun keywords, etc.) and sent users to a landing page where they could sign up for emails to receive a discount code.

This strategy not only armed Holiday World with oh-so-valuable first-party data for new prospective Guests, but it also allowed us to shorten the conversion window for all campaign goals. The high awareness audience knew the park and, therefore, were more comfortable buying their tickets within the window of time that could be tracked and used for pixel-based optimization. The low awareness audience needed to learn more before purchasing, but were comfortable enough to sign up for more information and a non-committal discount within a short period of time. Collecting the low awareness audience’s information empowered us to then nurture the leads until they put the discount code to use and purchased tickets. 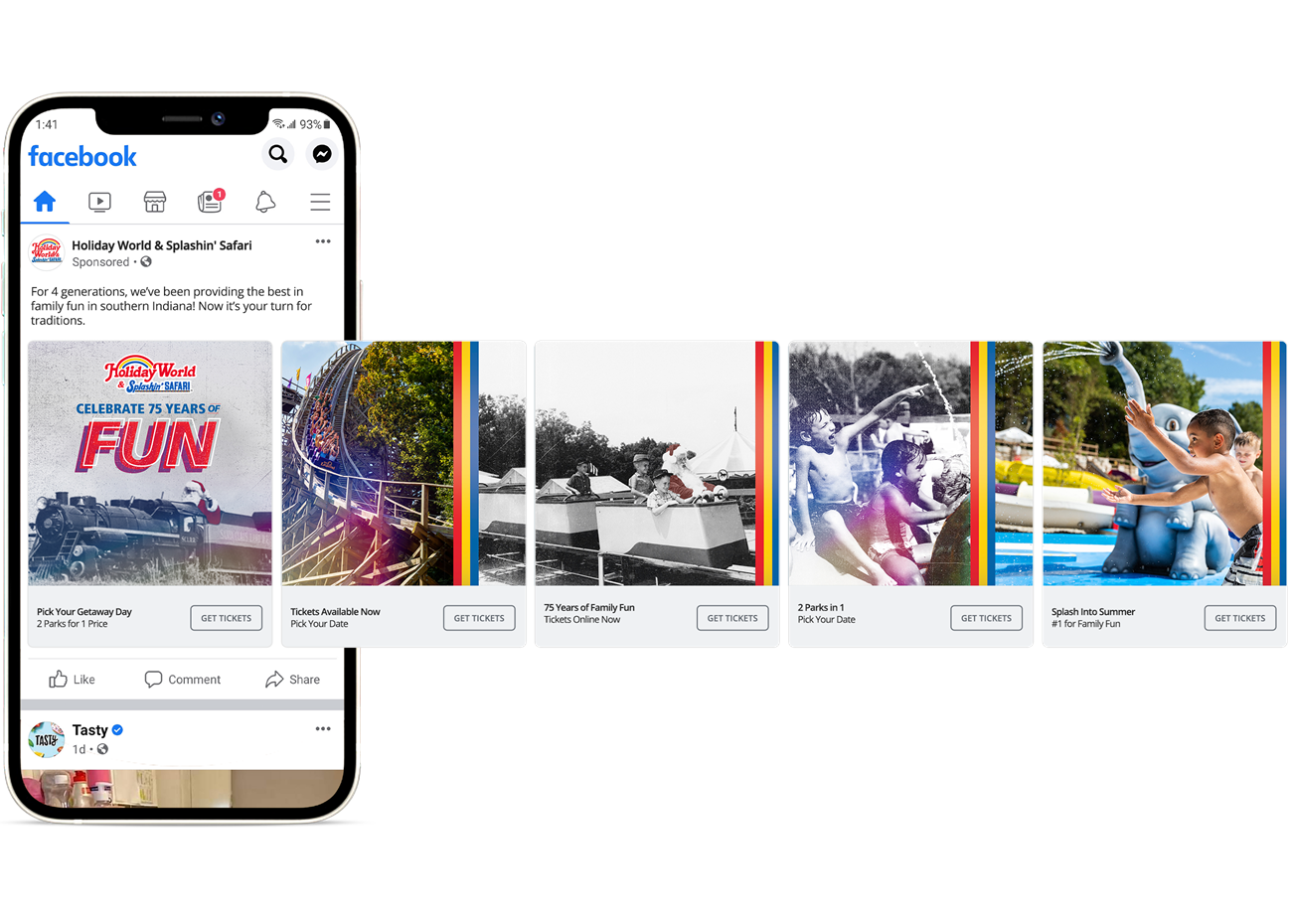 While we put “Intent to Purchase” conversions into place as a backup, they remained only a backup due to the success of our strategy. We were able to garner enough Ticket Purchases and Lead Gen Form Submissions within iOS14’s shortened attribution window based on how qualified and ready each audience was for its specific conversion. This made our targeting ability to report on results that much stronger.

Further, we achieved fantastic results for our client—even surprising ourselves—with a return on ad spend (ROAS) of 685% for the lead gen efforts alone! This means that even with an objective of driving lead gen form submission, the low awareness audience was buying enough tickets to fund the campaign and drive revenue for the park.

But as you know, for Williams Randall, the end of one campaign is the beginning of the next one. For 2022, we continued to grow this strategy. Given the sheer volume of purchases made by our low awareness audience, we re-evaluated the targeting for the lead generation campaign efforts to maximize the users receiving Buy Tickets messages and make the Lead Generation Campaigns discount codes even more exclusive. Instead of having high and low awareness targeting in each tactic, we identified entire tactics that had qualified, quick-converting users.

48% less budget was put toward the Lead Generation Campaign in 2022 compared to 2021 in order to maximize the number of sales brought in by the campaign without over-sacrificing first-party data collection of prospective Guests in need of more nurturing. And the strategy shift paid off.